How to teach your dog to search by smell

How to prepare your dog for winter. Owner Tips

Photo of the Airedale Terrier | Dreamstime.com

The Airedale is often referred to as the King of Terriers. He received this title due to the fact that he is the largest representative among the dogs of this group. The breed originated in the Eyre Valley, located in Yorkshire. It was bred for the purpose of hunting otters and river rats. These dogs are distinguished by their sporting disposition, and their abilities as a working dog were excellently manifested during the First World War. The Airedale is an intelligent, balanced and playful dog that earned its popularity among dog breeders.

During the First World War, a dog named Jack became the best signalman. This Airedale has delivered messages to headquarters from even the fiercest of battlefields. Constant artillery shelling, running through swamps and bumps – nothing frightened Jack. But work in such difficult and dangerous conditions could not pass by. The dog suffered repeated injuries, and the recent injuries in the form of a broken jaw and multiple wounds left no hope of survival. Thanks to the timely reporting of the state of affairs, this Airedale rescued an entire battalion. For his feat, he was posthumously awarded the Victoria Cross “For Valor”.

Airedale terriers like the Jack hero were bred as versatile dogs that are incredibly dexterous on land and in the water. Animals of this breed are successful participants in various competitions.

Airedale terriers can enjoy life to the fullest only when they are busy with business, even if it will be a normal game with children. Like all terriers, the Airedale is prone to digging holes, he can arrange a chase, actively bark. The dog is full of energy, so it will appeal to fans of running, because dogs of this breed need daily walks, active and noisy games in the yard among children or other dogs.

It is impossible to talk about the Airedale and not mention its individuality and independence. This intelligent dog often makes independent decisions without waiting for the owner’s command. If you want to be the owner of a dog that will strictly wait for your commands, then the Airedale will definitely not suit you.

It is worth noting that Airedale terriers are very touchy. They do not tolerate rudeness and aggression towards themselves, therefore, for a long time they harbor resentment against the ill-wisher. The dog can be quite aggressive towards other animals. It’s all the fault of the hunting instinct. This greatly complicates the process of raising and training a pet. That is why professional, consistent training is the key to raising an agreeable and loyal dog.

It is not surprising that Airedale terriers make unsurpassed watchmen. With great courage and zeal, the pet will protect its family. Despite this, such dogs are very friendly to guests who come to your house, but only if the pet has gone through a period of socialization.

Another, maybe somewhat unexpected, side of this dog’s character is playfulness and fun. Airedale terriers enjoy spending time with their families. They love to play, sometimes doing little innocent dirty tricks, especially when it comes to the kitchen.

Raising these dogs is a fascinating and interesting business. Many owners of such pets claim that only two Airedale terriers can be better than an Airedale.

Photo of the Airedale: 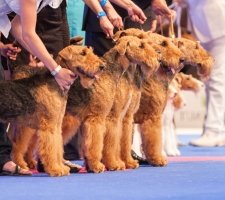 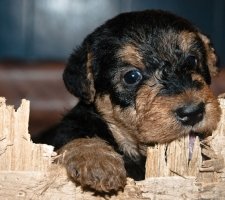 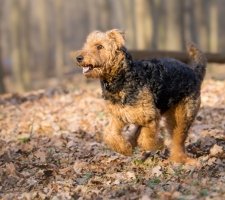 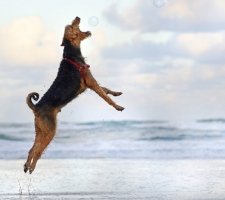 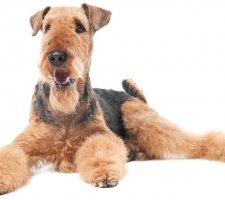 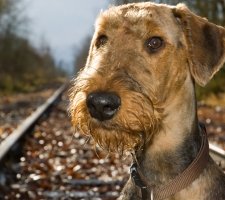 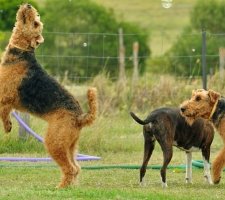 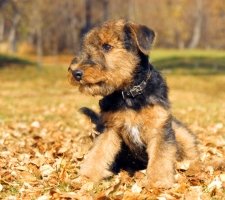 It is believed that the progenitor of most terriers, including the Airedale, was the black and tan terrier. Most likely, the breeding of the breed began in the forties of the eighteenth century. Like many terriers, this one was bred in a specific area. So, the Airedale is from the Eyre Valley, Yorkshire. Dogs of this breed were famous for their working abilities, they were excellent hunters, both on the water and on land. Airedale terriers hunted otters, foxes, badgers, martens, water rats and other animals.

It is believed that the Otterhound also participated in the breeding of the Airedale Terrier. Crossbreeding with this breed was necessary to improve the dog’s swimming ability.

In the middle of the eighteenth century, various dog shows became popular, in which the Airedale was very actively involved. It is believed that the founder of this breed is a certain Master Briar, one of whose sons later moved to Florida, where he greatly influenced the development of the breed in the United States. The breed was recognized by the American Kennel Club in 1888. It should be noted that some presidents were in awe of these dogs, especially Presidents Woodrow Wilson, Warren Harding, and Calvin Coolidge.

Although the history of the Airedale Terrier began with hunting, today representatives of this breed are considered versatile dogs, capable of doing anything. For example, Airedale Terriers took an active part in hostilities during various military conflicts, and also successfully hunted game on different continents. Today the breed is ranked 54th among those registered by the American Kennel Club.

If the Airedale is not trimmed, grooming becomes very difficult. To maintain the coat in proper condition, most owners of this breed of dog cut their pets several times a year. You will also need weekly brushing. This will help keep your pet’s hair tidy between trims. Airedale is rarely bathed, it is better to do it as needed. In addition, frequent bathing leads to brittleness of the coat and loss of its natural beauty, the coat becomes brittle. The claws of the Airedale also require monthly trimming. Despite the fact that representatives of this breed rarely suffer from ear diseases, nevertheless, monitoring the condition of the auricles must be carried out every week.

Airedale Terriers are distinguished not only by their enormous energy, but also by their good mind. But this does not mean that the dog does not require training. The dog trainer needs to be persistent and confident. The dog will listen only to the person for whom he will become an authority. Airedale terriers are particularly successful in performing various commands and agility. Education and training should be systematic, supported by rewards in the form of goodies and praise. Show proper attention to your pet and your efforts will be rewarded.

Airedale terriers usually do not suffer from various diseases. But, nevertheless, there are ailments to which they are prone. So dogs can develop hip dysplasia, which can subsequently lead to arthritis. You can get rid of such an ailment only with the help of an expensive operation.
Read also:  Kurzhaar