How to teach a dog the Seal trick

Kurzhaar (German Shorthaired Pointing Dog, or German Pointer) is a versatile hunting dog capable of hunting on water and on land. Male shorthaired pointer reaches 55-65 cm in height and weighs 26-35 kilograms. Females can be 52-57 cm tall and weigh 23-30 kilograms. Animals of this breed are real loyal friends who need a lot of physical activity.

The Kurzhaar is a versatile hunting and sporting dog and a good companion. The animal hunts for birds, but it can become an unsurpassed hunter for large animals, even a deer! Hunting instincts do not prevent the dog from being an affectionate and gentle friend. He loves to play with children and be with his family. This dog will always keep company during walks or evening runs. If you are looking for a strong, loyal and gentle friend for the whole family, then the shorthaired pointer can become an excellent pet that all members of your family, without exception, will love.

The dog has graceful body proportions, expressive eyes, sharp mind and good-natured character. The tail of these dogs is usually docked, leaving about 40% of the original tail length. Animals lend themselves well to training. It is important to start learning and socializing from a very early age.

The Kurzhaar is full of activity and enthusiasm. He loves to be between people, play with children and give all the warmth and attention to family members. If you leave the dog alone for a long time, then the animal may show unpleasant character traits. The dog can be nervous, even aggressive, sometimes loneliness disposes of the animal to harm the interior items in the house. It is noteworthy that males are more sociable than females, but loneliness is unbearable for a shorthaired pointer, regardless of gender.

The powerful musculature of the dog needs regular physical activity. The webbed feet and waterproof coat indicate that the dog loves water. If you have a pool, then undoubtedly the shorthaired pointer will not refuse to swim in it.

The dog always tries to please and please its owner, especially if such efforts are rewarded with a treat or pet’s praise.

The Kurzhaar is one of the few hunting breeds that, in addition to their main purpose, do an excellent job with the role of a caring, attentive friend and a full member of the family. Kurzhaar easily hunts birds, especially waterfowl, rabbits, raccoons, deer.

Photo of the shorthaired pointer: 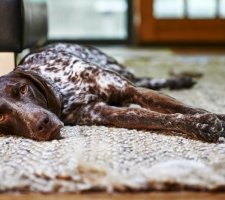 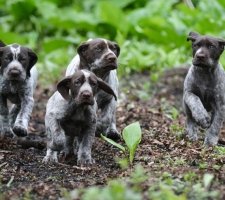 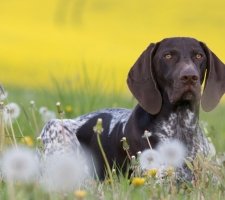 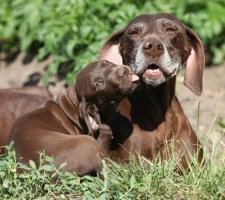 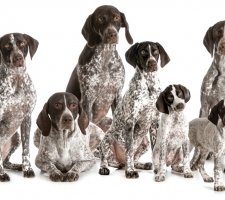 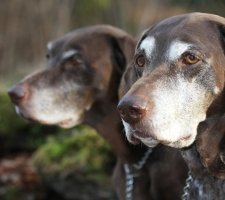 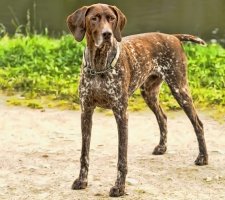 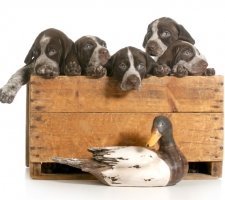 The first representatives of this breed appeared in the 17th century. German short-haired cops, as we know them now, were bred in the middle of the nineteenth century. The ancestors of the shorthaired pointer were Spanish pointers, which later began to be crossed with English pointers. The purpose of this selection was to breed a hunting dog capable of working on water and on land.
Read also:  Drathaar

The prince of the royal court of Hanover, Albrecht zu Solms-Braunfeld, generously rewarded the breeders of these dogs, as a result of whose work a hunting dog appeared, which became an intelligent, affectionate and gentle friend of the family. The first dog of this breed was introduced to the United States in 1925. She was brought there by Dr. Charles Thornton, who was actively engaged in dog breeding. Five years later, the breed was recognized by the American Kennel Club and registered.

The Second World War left its mark on the breeding process of German short-haired cops. With the approach of war, many breeders hid not only acquired gold, diamonds, works of art, but also animals. The best dogs were sent to Yugoslavia. Since Yugoslavia was under the Iron Curtain after the Second World War, German breeders did not have access to the best representatives of the breed. They were forced to restore the breed with the help of the dogs that they had left.

Meanwhile, in the United States, the selection process was very active. The process of breeding German Shorthaired Pointers reached its peak in the 1950s. During this period, shorthaired pointers took an active part in various exhibitions and competitions held in the States.

The popularity of this breed among Americans has inspired many writers to perpetuate the breed in their works. For example, Robert Parker, a master detective, turned a shorthaired pointer named Spencer into one of the main characters in a detective novel called “The Boston Detective.”

Other writers have written extensively about this dog as well. This is how Rick Bass wrote “The True Story of the Best Dog I’ve Ever Owned”, the protagonist of which was also a shorthaired pointer. These dogs did not go unnoticed among journalists. Sports journalist Mel Wallace wrote the book “Run Rainey”, the main character of which was the same shorthaired pointer. Today this amazing breed, proudly named “Shorthaired Pointer”, is ranked 19th among 155 breeds registered by the American Kennel Club.

The character of the shorthaired pointer

The Kurzhaar is a versatile hunting dog, an excellent companion, loving family member and reliable companion. Kurzhaars love to be among people, walks in the fresh air give a special pleasure. Also, dogs of this breed have proven themselves well as guard dogs. They can be assigned to guard any object. For active families, the shorthaired pointer is an excellent pet.

They bathe shorthaired hats as needed. Excessive bathing can lead to negative consequences: washing out of the natural oils that protect the coat from brittleness. Many aspiring dog breeders make the common mistake of bathing frequently with plenty of soap. As a rule, beginners believe that this will help to make the coat beautiful. In fact, this can lead to the completely opposite effect.

Active representatives of this breed will erase claws naturally, but if this is not enough, then they should be trimmed. Brushing your teeth weekly will help prevent tartar and odor.

Ears should be carefully checked every week for inflammation or infectious diseases. The auricles should only be treated with a special solution prescribed by a veterinarian. Do not use cotton swabs when cleaning your ears.

Kurzhaar is not easy enough to train. They grasp the basic hunting teams and techniques on the fly, but learning basic general skills can be problematic. These dogs are distracted by any noise, sight, etc. It is very difficult to concentrate their attention on the learning process. Learning should start at a very early age. The classes themselves should be short. Consistency, consistency and the use of rewards should aid in the successful training of these dogs.