The greyhound was bred in Russia as a hunting dog. These animals were hunted in groups, most often foxes, rabbits and wolves. Later they became popular throughout Europe as companion dogs. Before deciding to become the owner of a Russian greyhound, you need to clearly determine whether this dog is right for you.

The height at the withers of the male Russian greyhound is about 70 cm, and its weight is 35 – 50 kg. The height of the female can reach 65 cm, and the weight is 40 kg. The height of the dog, its slender body, narrow head and silky coat have become a kind of standard of elegance among dogs. Pets of this breed were permanent residents of the royal chambers of Russian monarchs.

Greyhounds are prized for their grace and athletic stature. They love to run, so they become frequent participants in various competitions. However, it cannot be said that these dogs are very active. They will be happy to spend the whole day with you in bed.

Despite the calm nature and royal appearance, the Russian greyhound is not an exhibit for the home! Dogs of this breed need your attention and constant communication. Therefore, if you cannot be constantly at home, this breed will not suit you.

The coat of a greyhound is prone to spring shedding. The size of the dog suggests that it is not quite suitable for keeping in families with small children. Although these graceful dogs are very gentle, while playing, they can push and harm the baby inadvertently.

The sporting warehouse of the Russian greyhound is a great feature for those who are going to raise a dog for participation in competitions and competitions, especially in those where it is necessary to show skills in running. In Western countries, these dogs are often used for hunting rabbits, and protecting livestock from coyotes.

Today the Russian greyhound is no longer a royal dog, but a reliable friend and companion. Such pets are very playful, so they often chase moving objects. Perhaps this behavior is also caused by natural hunting instincts. This fact suggests that it is necessary to limit the free space of the dog, that is, to worry about the fence of the yard in advance.

Due to the lack of a large amount of fat in the body, dogs of this breed are very sensitive to drugs, especially to anesthetics. Please consult your veterinarian in advance to avoid possible future troubles.

Russian greyhounds are somewhat finicky in their food. True, this is caused not so much by the character as by the physiology of the animal. The fact is that these dogs often suffer from bloating. Exercise should be avoided after feeding.

Greyhounds that have not gone through the early stages of socialization may become nervous and anxious around noisy children. As for barking, these dogs do not bark often, and they do it not so loudly. Therefore, a greyhound as a security guard is not the best option. It is unlikely that these animals will be able to raise the alarm at the right time.

Russian greyhounds get along well with cats and other pets, but for this you need to ensure the early socialization of the pet. In fairness, we note that hunting instincts often push the dog to chase cats, but they do not harm them.

Greyhounds are not common breeds. Finding a good breeder may take you a long time. Show patience! Better to spend time looking for a good breeder than buying a puppy from a random seller! Be sure to inquire about the health of not only the puppy, but also his parents, you must make sure that you buy a completely healthy pet!

Photo of a Russian greyhound: 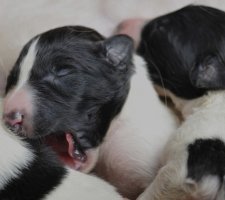 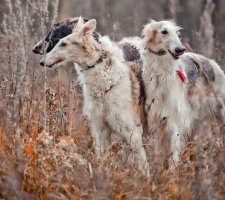 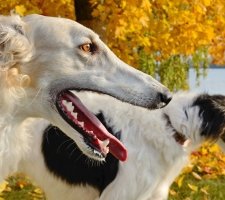 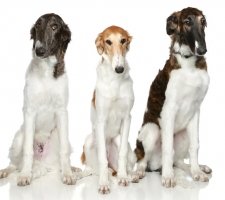 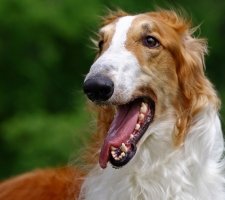 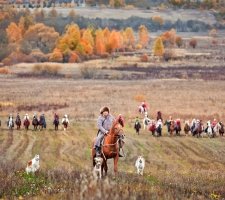 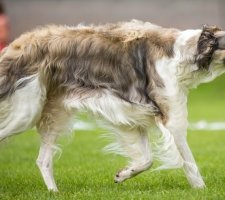 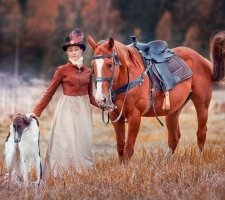 The history of the Russian greyhound dates back to 1650, when the standard of this breed was first described. Greyhounds have been bred for hundreds of years. The nobles acted as breeders. They were the ones who used Russian greyhounds in hunting, which was quite an exciting sight. Such a hunt took place with the participation of up to a hundred greyhounds and with the same number of Foxhounds. The task of the animals was to find and corral prey. When the wolf found himself, dogs were lowered on him. Animals helped to drive the wolf, after which the hunters killed the predator. Such spectacular hunts were popular until 1861, when the serfs were liberated and the nobles could no longer have unlimited labor.

By 1873, greyhound owners were exclusively connoisseurs of this breed. At the same time, the so-called Imperial Association of Russian Greyhound fans was created. At the same time, the breeding of these dogs began in the royal nurseries, from where they later came to America. This Association included Tsar Nikolai Nikolaevich himself, his uncle, as well as a wealthy landowner named Artem Boldyrev.

Unfortunately, this Association, as well as its dogs, met a terrible fate. In 1918, many of this breed were killed by revolutionaries. The breed was saved only due to the fact that many puppies were donated to representatives of the foreign nobility, including Queen Victoria, as well as the Princess of Wales.

In 1936, the name of the breed “greyhound” was officially changed to “Russian greyhound”. Today there is no significant difference between the modern greyhound and the one that flaunted in the royal chambers. They remained as elegant as they were in the days of tsarist Russia.

The character of the Russian greyhound

The Russian greyhound is a gentle and affectionate pet with a special character: sometimes serious, sometimes flighty. The Greyhound is a good and intelligent companion dog. Her reaction to strangers can be friendly or detached, this dog is used to trusting people, even strangers. Despite the calm nature of the Russian greyhound, it is not so easy to train. It’s all the fault of a stubborn character.

The Russian greyhound needs to be brushed every week to keep its coat healthy and to prevent it from spreading around the house. Professional groomers recommend using special soft brushes for these dogs, otherwise the coat of the animal can be damaged. Dogs of this breed tend to moult slightly throughout the year, however, heavy moulting occurs in spring and autumn. During this period, wool requires special attention.
Read also:  Airedale

Representatives of this breed are bathed only as needed. To prevent problems with the ears, they need to be examined weekly and treated with a special solution. Brushing your teeth also belongs to weekly procedures, thanks to which the dog will not have problems with the gums and teeth, and there will be no bad breath.

The Russian greyhound, like other hounds, is not easy to train. She has a stubborn character, so she does not like being commanded. Such animals need a self-confident trainer who is ready to show perseverance and patience. The rewards in the form of treats have a positive effect on the learning process. Early socialization is extremely important for this breed. Puppies are often afraid of strangers, if you do not socialize the pet at an early age, then the fears can remain forever and negatively affect the dog’s behavior – the pet can become restless or even aggressive.